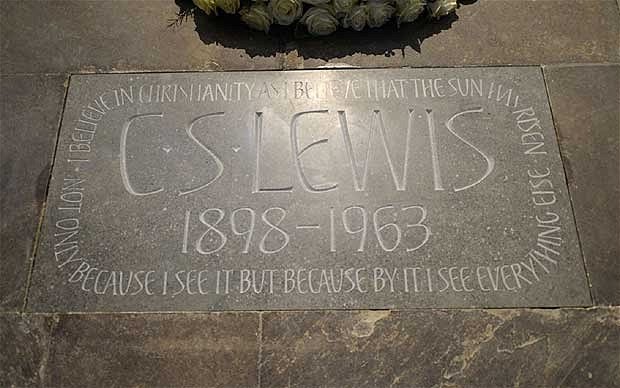 I’ve been reading a lot about Clive Staples Lewis and his take on scripture (and blogging here), while simultaneously co-directing Scientists in Congregations, which encourages church congregations throughout the U. S. to take science seriously. After all, November 2013 marked the fiftieth anniversary of Lewis’s death—and on the 22nd specifically, a memorial was dedicated in his honor in the Poet’s Corner at Westminster Abbey, where he join William Shakespeare, Jane Austen, T. S. Eliot, John Milton, William Wordsworth and the like. This honor for a scholar of the Middle Ages and the Renaissance who dubbed himself a “dinosaur” and yet whose books still sell millions of copies, whose children’s fiction, The Chronicles of Narnia, has its fourth feature film in process, and who was dubbed today’s “hottest theologian” just a few years ago by Time.

For all those reasons and more, I think he’s earned the moniker of “St. Clive.”

For other reasons, I’m pondering these thirty-seven Christian congregations we’ve funded, who represent twenty-five different states, two other countries, eleven denominations, thousands of members, and the gamut along the theological spectrum. They know science is fascinating, powerful, and important, but aren’t convinced, like Richard Dawkins, that science—and particularly Darwin—“made it possible to be an intellectually fulfilled atheist.” They also realize, in order to engage the insights of science, they need to understand their Bible better. Like other Christians, they have a sense—from vague to quite poignant—that the Good Book is crucial for them.

All this brings me to wonder if these two projects could speak to one another, especially around the Bible. Here’s why: Christians that love science also value the Bible, and C. S. Lewis was a world-class Oxford and Cambridge literary scholar who viewed the Bible in a way that is neither truly liberal nor conservative and that allows for both a penetrating engagement with scripture and with science.

Lewis knew how to read a book and prized what books bring. “There is nothing in literature,” Lewis wrote in his famous academic study, The Allegory of Love, “which does not, in some degree, percolate into life.” Consequently, Lewis read the Bible as a literary text (which is certainly not the same as taking the text literally) and sought to find God’s word carried by Scripture. He read the Good Book as full of narratives, meaningful stories, or—as he liked to put it—“myths”… which doesn’t always equal “fiction.” Myth, as Lewis wrote, is “at its best, a real unfocused gleam of divine truth falling on human imagination.” And, as he concluded after a famous 1931 walk with J. R. R. Tolkien and Hugo Dyson, myth became fact in Jesus (which, of course, is recorded in the New Testament).

In that light, Lewis believed the Bible as a book could be read on its own terms and offer legitimate wisdom. Therefore, it didn’t need science to validate its claims. Paradoxically, this may be the best way for congregations that take science seriously as they read their Bibles… in other words, not to suffer unnecessary pains about whether the Bible supports or denies science. Having studied the way churches interact with science over the past two decades—and the thirty-seven congregations we’ve funded—I realize that the Bible often seems outdated because it has not been updated with the most current scientific discoveries. How can we correlate quantum theory and the book of Genesis? Not a particularly pertinent question to Lewis. Science can have a freedom not bound by its corroboration with a specific biblical text. And the Bible, for its part, doesn’t need quantum theory to make it true.

Does Lewis help us today? Many impugn the Bible’s truth because it doesn’t match with the advance of scientific knowledge. It seems outdated and surpassed. In response, we must recall that Lewis never believed that science—nor particularly what he called the “Scientific Outlook”—should be the final arbiter of truth. So he forcefully and consistently argued—in fact, at his vastly popular Oxford Socratic Club, among other places—against science and its norms standing above other forms of knowledge and authorities, such as the ongoing testimony of the church (in the case of scripture).

This means that his understanding of scripture leads to a model of some freedom in its relationship with science and vice versa. Lewis’s approach may at times help Christians avoid pseudo-problems with the Bible when it does not provide, in his words, “impeccable science.” For example, Lewis writes, Genesis 1-2 probably “derived from earlier Semitic stories which were Pagan and mythical,” or as the church Father Jerome put it, was written “after the manner of a popular poet” (thus a myth). And yet, under the guidance of the Father of lights, Lewis concluded that this biblical text became a vehicle for the profound story “which achieves the idea of true Creation and a transcendent Creator.”

Our project has clearly discovered that the Bible and science can and must speak to one another, but these discoveries imply no need to justify the truth of biblical texts against modern science of Big Bang cosmology or evolution, for example. Instead we are free to make connections where they exist. It’s a free interchange without forced agreement or impenetrable conflict.

In the end, Lewis liberates us to read the Bible as a powerful book—one that leads Christians to the center of their faith, Jesus Christ—and to let the liberated study of science also take place. I think that’s something that will take us forward in the discussion and that can help our Scientists in Congregations churches. Maybe that’s one more reason Lewis still speaks today.
Posted by My Reflections at 9:18 PM No comments: