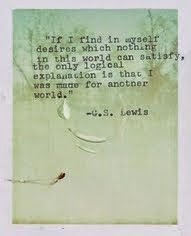 
Let’s look at #2 for a moment: Lewis’s argument from Joy or desire. The argument brings to mind the question of whether Albert Einstein’s words about “God” were really about, well, God, such as “everyone who is seriously involved in the pursuit of science becomes convinced that a spirit is manifest in the laws of the Universe—a Spirit vastly superior to that of man.” Richard Dawkins argues (not surprisingly as the arch-atheist) that this stuff in Einstien isn’t really about God, it’s about transcendence. In his recent book, scientist Amir D. Aczel, contends (as I understand him) that, no, this is really about the Deity, and in fact, believing in God is profoundly compatible with science.
So I'm going to set Lewis in this fray. What is he saying? Is he arguing that this sense of transcendence—or better, this desire for it, which Lewis calls “Joy”—proves God? No, at least not as a deductive proof. Instead Lewis is making a suppositional argument here: We do not fully understand the desire for something beyond (or Joy) itself, but it opens to a wider metaphysical conclusion, one that points to God who created us. Or more systematically, the form of this suppositional argument from desire proceeds as follows: Suppose God created this world, we can imagine that God would leave a desire for more than this world offers. We experience a longing for more than this world offers. It is reasonable to see this as pointer to God.
In a certain sense then, the argument cannot be decided on the basis of science or not. Science seeks to understand the interactions of the material world. And yet, many scientists, because they focus their lives on the interactions of the material world, believe that this world is all there is.
Like my title says, these are notes. Nothing fully conclusive yet. But I’m interested to know what you think…
Posted by My Reflections at 8:43 AM